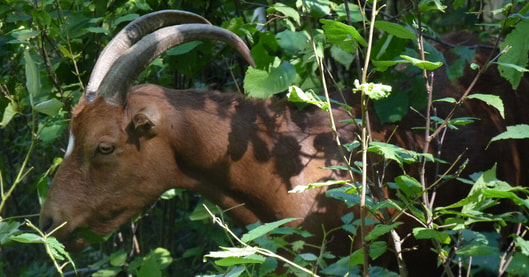 The breeds of sheep and goats sometimes seem endless, fiber, meat, milk and combinations of these characteristics make for some interesting animals.   However, the needs of small ruminants are somewhat similar (although sheep and goats do have differing needs and tolerances for copper).   Sheep are grazers while goats are closer in eating habits to browsers, making use of shrubs, trees and rough forage more than their grazing relatives (Smith, 2009, p.  380)

Goats and sheep differ in their digestive systems from cattle even though they are all ruminants (Smith, 2009, p.  379).   Ruminants (unlike New World Camelids/llamas and alpacas) have 4 compartments to their "stomach" (NRC, 2007, p.  5)

The New World Camelids are sometimes kept with sheep or goats, sometimes as guards, often as another fiber-producing animal.   It is assumed that they will do well with whatever feed and mineral is offered to their smaller pasture mates and this may be true in some cases.    The camelids have come into their own in North America now as both fiber animals and pack animals and in some cases, for meat.   While they are superficially similar to goats (and somewhat related), they do have some differences.   Like sheep and goats, they do not do well with mineral and salt blocks.  Unlike sheep or goats, they cannot extend their tongues far out of their mouths, limiting their ability to lick a block (or even their own young, called crias)  (Fowler, 2010, p.  19).

Both camelids and sheep and goats (ruminants) must have large amounts of coarse feed for proper fermentation in the digestive tract.   They also chew their cud, regurgitating partially digested material for further chewing.   Camelids do not have the same digestive system that a ruminant does but their digestion is similar.   They have 2 sections of stomach for anaerobic fermentation (out of 3) and their contents are dry and homogenous compared to the layers of different material and liquid found in ruminants.   These differences may account for the fact that camelids are not as prone to bloat as are ruminants  (Fowler, 2010, p. 21)

Camelids are also more efficient at extracting nutrients from their feed than are ruminants.  One study has shown alpacas are 50% more efficient than sheep when digesting fiber (Fowler, 2010, p.  21).

It should be apparent that supporting proper digestion and providing minerals in the best available form is crucial to health in both camelids and ruminants. 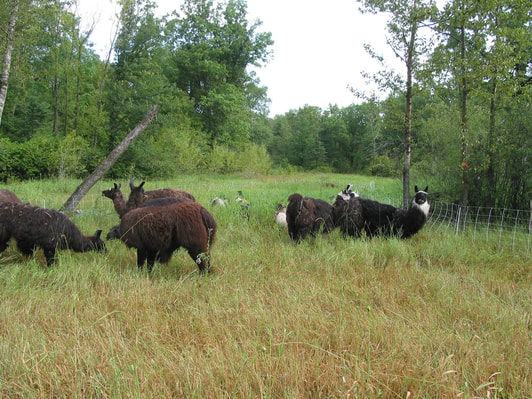 By Alethea Kenney, Copyright 2021-2025.  Do not reprint or copy without permission.